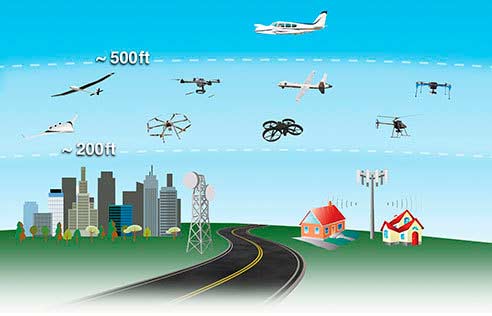 Posted by Adele Scholl on 11/25/2016 to
By Patrick C. Miller | November 17, 2016
NASA's concept for a UTM System would safely manage diverse UAS operations in the airspace above buildings and below crewed aircraft operations in suburban and urban areas.  Photo:  NASA AMES Research Center

"This major development builds on central New York’s strengths and will cement the region as a global hub for this rapidly growing industry," Cuomo said. "With strategic investments in emerging high-growth sectors, we are strengthening regional economies across New York and reinvigorating this state’s spirit of innovation and enterprise."

In August, Cuomo announced a $5 million investment for Phase 1 of Project U-SAFE. The latest investment will be made through a partnership between Empire State Development and the Northeast UAS Airspace Integration Research (NUAIR) Alliance.  The second phase will accelerate the testing, certification and safe integration of UAS into the airspace. With Phase 2, Cuomo said the state is committed to implementing NASA-founded concepts of UTM systems and UAS standardized testing and rating.

Gryphon Sensors in North Syracuse was one of the New York companies that helped organize and coordinate the UTM conference with NASA, the FAA and the Air Traffic Control Association. Craig Marcinkowski, Gryphon Sensors director of strategy and business development, said the event highlighted how far UTM has come since last year’s inaugural conference in California.

“The first UTM convention got this big NASA collaboration community together to talk about TCL (technology capability level) 1,” he said. “For this one, the focal point was TCL 2 and the progress that’s been made and what’s happened in the industry since then. There was much more FAA content and FAA participation. It showed a coming together of NASA and the FAA from a UTM perspective.”

One of the NASA-founded concepts discussed at the UTM conference was National UAS Standardized Testing and Recording (NuSTAR).

“It’s almost like underwriter’s lab for drones,” Marcinkowski said. “It’s a body that will create standards and ways to certify UAS for certain performance. The vision is that this is a national asset facility. It’s almost like a mock indoor city where you can test drones for a variety of environmental conditions, whether it’s wind, sand, fog, dust or a GPS-denied environment. There will also be a cyber-assurance lab within NuSTAR.”

Gryphon Sensors recently participated in TCL 2 in Reno, Nevada, where it provided ground-based radar to detect manned aircraft operating in the same airspace as UAS. The company is also part of the FAA’s Project Pathfinder, working with BNSF Railway on beyond-visual-line-of-sight UAS flights to inspect railroad lines.

“If a non-cooperative intruder comes into that airspace, we can account for it and have the UAS execute an avoidance maneuver or land—whatever its safety protocol is,” Marcinkowski said. “We feel like we’re providing a niche technology to enable beyond visual line of sight flight by helping to de-conflict the airspace.”

According to Marcinkowski, the technology to create a viable UTM system that enables beyond-visual-line-of-sight operations for UAS already exists.

Marcinkowski said that what’s left to do is linking the systems together in a way that makes sense, collecting data, building a safety case and proving or validating it with the FAA or another certification authority.

It's very interesting how NASA is involved. 1960 an unmanned craft crashed into the grange park at Westall. Clayton. On 6 April 2017 a meeting is on about how the RAAF air force attended. Was a cover-up part of a scam by the RAAF to stop an insurance payment to people injured at the time. NASA should attend. While introduce star war laser drone technology.