As the latest incident involving a UAV and manned aircraft hits the news, it seems that these continuing episodes are not going to stop until some form of regulated tracking can be enforced on UAV’s as they continue to enter national airspace; enter NASA.
(0) Comments
Read More

Flytrex Sky: a Drone That Will Bring You The Keys You Left at Home

ke a drone that you can send over to Grannie’s house for a daily dose of her good old fashioned brownies? Flytrex Sky promises just that. It is the world’s first cloud connected consumer drone with delivery capabilities operating on its revolutionary cloud based Sky Platform.
(0) Comments
Read More

rior of reactor buildings at Tokyo Electric Power Co.’s Fukushima No. 1 plant. The unmanned aircraft will use lasers to detect and avoid obstacles in flight and will be able to land to replace its batteries in the absence of an operator.
(0) Comments
Read More

Watching marine life to gather data about behavior and abundance can be tedious and time-consuming for researchers, but recent studies indicate unmanned aircraft may offer a way around such obstacles. 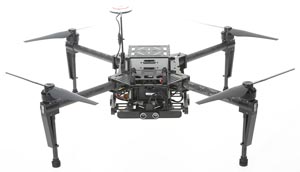 DJI has just made its UAV platform a lot more developer-friendly with a new test drone and collision avoidance system, along with an SDK for its current DJI Inspire 1 and Phantom 3 models. The Matrice 100 (M100) is a new quadcopter made specifically for developers to help them test new sensors, processors and other tech. The bare-bones looking craft will fly for 20 minutes with a 2.2 pound payload or longer using an extra battery. The company said it "includes everything needed to fly with minimal assembly and no need for tuning or programming."
(0) Comments
Read More
Follow Us
Information
Browse By Category