A) had approved less than 15 Section 333 exemptions authorizing unmanned aircraft systems (UAS) operations. Roughly three months later, that number has jumped to over 130 Section 333 exemptions approved. The surge in approvals can be attributed to recent changes in the FAA’s approval process as well as increasing pressure from the White House and industry to speed up UAS integration. A few of the recent changes implemented by the FAA include introduction of a “blanket” COA, reliance on a “summary grant” process, and dialing back of certain prerequisites to approval.
(0) Comments
Read More

Is it Time for a Drone Ambulance? 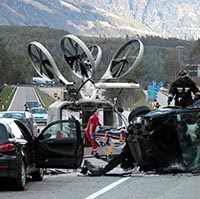 In the event of an emergency, first responders are the most crucial part of making sure everyone involved gets out quickly and safely. Sometimes traffic, one way city streets, construction, and other forces out the emergency responders control hinder how quickly they are able to arrive at the scene, which is not a positive outcome for anyone involved. Consider a remote controlled drone. This type of machine can circumvent any type of obstacle it may come across on the streets in order to get to a situation as quickly as possible.
(0) Comments
Read More
Follow Us
Information
Browse By Category