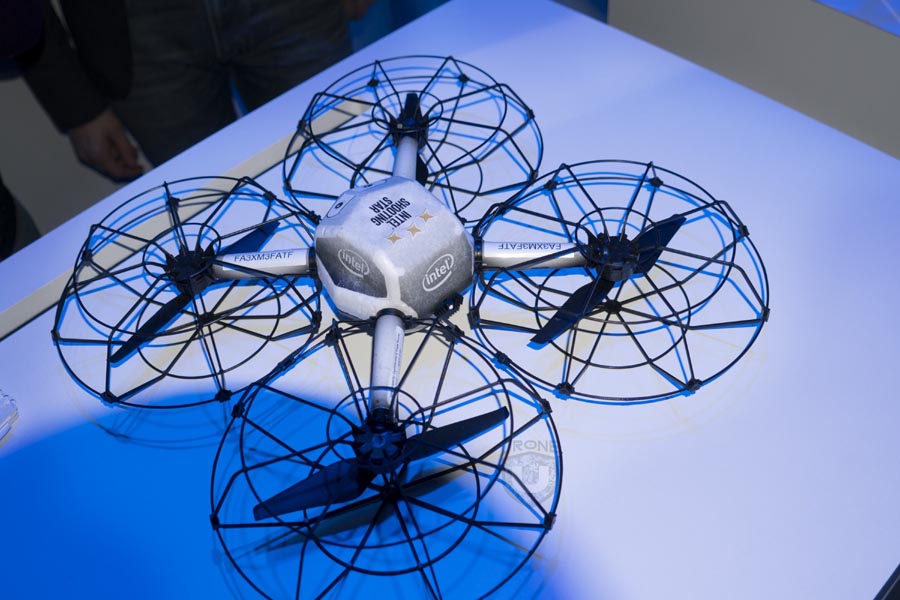 Posted by Adi Joseph, USA Today , KGW on 2/7/2017 to
Lady Gaga’s Super Bowl halftime show had no special guests — unless you count the drones.

Intel Drones supplied Lady Gaga and the NFL with a show-stopping show-starter — 300 Shooting Star drones painting the night sky in a pre-recorded segment in Houston, as she sang “God Bless America.” The closing scene with the Pepsi logo also was those same pre-recorded drones.

For The Win spoke to two of Intel Drones’ top people — general manager Natalie Cheung, who was on the ground in Houston running things, and vice president of business Anil Nanduri, who organized the collaboration — about the show and the future of drones in entertainment.

Let Cheung and Nanduri answer all your questions now that you’ve seen their work in action.

So how did this happen?

Intel filmed the drone shoot over several days, with the main shoot — the one we saw — done on Jan. 30. There were reports of low-flying helicopters as part of security in Houston, but that was only part of the story. The top-secret drone usage was the other.

“We were on site for nine days, so we got the proper waivers to fly in Class C airspace up to 700 feet,” Cheung said. “We got the waivers to do this at night with multiple drones per pilot through the FAA. We were testing out our drones, tweaking our animations throughout this whole process, and we filmed for one night, and it was perfect.”

The setup was not so quick, but it all came together once the right people got to talking.

“We worked a lot with the (NFL’s) creative team,” she said. “You can see there’s a lot of different stakeholders in this. We worked with NFL, Pepsi, Lady Gaga. She was very aware with what was happening with the story board from the very get-go, so it was a very constructive and very tight collaboration.”

Why couldn’t it be done live?

“So there’s a lot of weather and environment (issues),” Cheung said. “In February, you don’t know what it will be like during Super Bowl day. We’d hate to plan all this and, if the wind speeds are too high or if it’s raining and the roof is closed, no one can see this spectacular show. So our creative team as well as the Super Bowl creative team felt this would be best to be filmed. Lady Gaga also was on the roof when this was filmed, and from a logistics and creative perspective, it’s a bit hard for her to go from the roof all the way down to the floor of the stadium.”

But Nanduri was quick to dismiss any thought that this couldn’t be a live show.

“When we talked about Super Bowl, the primary weather issue was if they closed the dome,” he said. “If I had to simplify it, if you can do fireworks because of weather, so can our drones. … We’ve never had a situation where we can’t fly. The shooting star drone is water-resistant. It can handle light rain. It can handle a decent amount of wind — 8 meters per second, which is pretty decent wind speed.”

What is the end goal here?

Cheung explained, “It’s a different way of merging art and technology, which I think a lot of people haven’t seen. We started this effort maybe a year and a half ago, and it started with 100 drones in the sky and showed a simple Intel logo. We caught on pretty quickly that this was more than just fireworks. It could be branding in the sky. It could be an artistic event. There’s a lot of different ways that people could utilize this. The Disney team we worked with used it as a theme park attraction. The Super Bowl team utilized it as a way to emphasize and express Lady Gaga’s music. … It can create and mean many different things.”

And Nanduri brought up the Guinness Book of World Records showcase as an example that led to this opportunity — and many more in the future.

“When we did the Guinness Book of World Records, the 500 drones, that was a huge viral phenomenon, and we had already started to fly at Disney, which was another uptick of what the light shows are all about. In that process, I think there was an awareness created, especially to the creative agencies around the world, what a canvas in the sky that they can now paint with lights could be as a value-add to their experience.”

Don’t be surprised, then if you see Fourth of July shows and other holiday spectaculars using drones more and more.

So are we pretty much talking about robot fireworks?

“It’s not exactly fireworks,” Cheung said, citing the speed — 30 minutes for a single animation — and repeatability of the show.

They’ve been used at Disney, too, where they were deployed in a similar method to nightly … fireworks shows.

“There’s a good comparison of drones and fireworks, Nanduri said. “There’s a couple aspects of fundamental difference, though. With drones, I like to think of it as painting a canvas in the sky. You have the flexibility of creating animations, creating logos, creating storytelling. With the comparison to fireworks, yes, (both) can create a lot of formations, a lot of excitement — but it’s green. It’s reusable. No pollution. There’s a fundamental difference in precision and a difference of solving pollution and other issues with fireworks, and the last part is it’s reusable. Of course, you don’t get the boom of fireworks.”

Drones! I’m still kind of weirded out by this …

Nanduri: “With the notion of drones and the perception of the public, I think light shows are one good way to bring that perception back to (what a drone really is). … If I had to go back a year or two and look at what the perception of drones was then, I start to see a lot friendlier use of the term. You see the industries using the term as well. They’re more comfortable. And we look at light shows as … re-emphasizing that drones can be used in so many different ways.”

Cheung: “Intel’s changing the perception and definition of drones here. No one ever thought that a drone could create such a beautiful art show and such an amazing experience for nighttime entertainment. It’s not something that we’re redefining the definition of a drone. You can see them being used in commercial applications. But when we talk about drones now, people get excited. They see it as a light in the sky.”