Posted by Adele Scholl on 6/24/2015
Share |
A test flight was completed at the plant’s No. 5 reactor building, which escaped severe damage in the March 2011 nuclear disaster. It is not known when the meter-wide hexacopter will be ready to begin inspections inside the buildings housing the No. 1 to No. 3 reactors, which suffered meltdowns, but the team behind it is confident the drone will have a role to play. 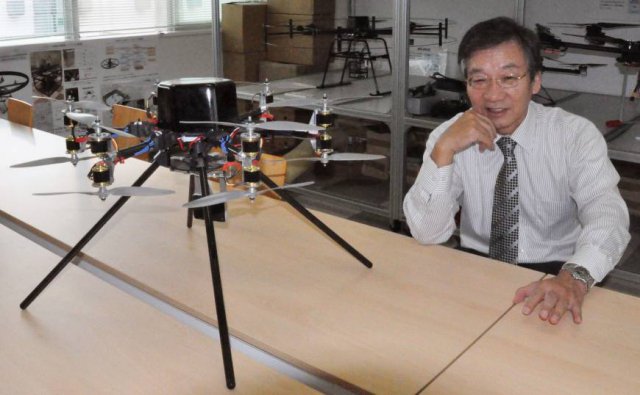 “The time will certainly come when drone technology will be of help,” said a member of the development team.

The drone is the work of Autonomous Control Systems Laboratory Ltd., a university-based venture headed by Kenzo Nonami, a professor at Chiba University.

The six-propeller drone is equipped with a camera, an instrument to measure radiation levels, and a dust collector.

The aircraft is different from conventional drones in that it can detect walls and other obstacles by laser, even when inside a reactor building, where GPS would not work and where radiation doses may be too high for humans.

The information gathered during a survey flight is converted into three-dimensional data in real time, enabling the production of images of damaged walls and dangling piping, for instance.

The lab has also developed an instrument for automatic battery replacement to eliminate the risk of plant workers being exposed to radiation during battery changes.

When the power begins to run low, the drone automatically lands on a “heliport” on the flatbed of a truck and loads itself with a new battery. This will enable it to prolong its mission. In the demonstration test at the plant’s No. 5 reactor building, the drone was used to carry out an inspection from the first floor to the fifth floor, where a pool for spent fuel is located. The test proved the aircraft’s ability to shoot video and measure radiation levels.

Nonami started developing the drone soon after the March 2011 nuclear crisis began, anticipating that there would be demand for a flying robot in what is shaping up to be a decades-long cleanup.

“Once the work shifts to the stage of removing melted nuclear fuel from damaged reactors, radiation doses are expected to rise in the work areas,” Nonami said.

“I think the drone will be useful as it can be sent to measure radiation levels and contribute to giving the highest priority to human safety.”