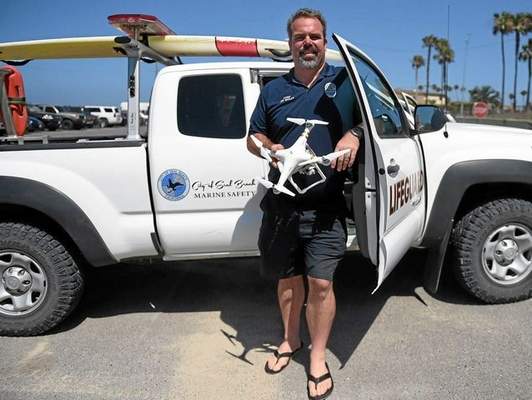 Before the use of technology, lifeguards were sent by boat to try and scan for sharks, a time-consuming and ineffective method since lifeguards are 5 feet off the water and often scare sharks away, Bailey said. The drone drops search missions down to roughly 30 minutes.

“It’s currently in a trial period, but it’s been working out great,” Bailey said. “Every time it’s been flown, sharks have been spotted and its turned out to be a good tool.”

Experts aren’t sure why there has been uptick in sightings this year. But Chris Lowe, a professor and director of the Shark Lab at Cal State Long Beach who has provided assistance to lifeguards in Seal Beach, said the risk of sharks harming people in the water is very low.

Cautionary signs were posted in the area in late April when the Huntington Beach Marine Safety Division notified Bailey of sharks in the area. Bailey said both departments are working together to keep the public informed.

If sharks are behaving aggressively or are larger and deemed to be a risk, beaches would be closed -- which hasn’t happened yet this season, Bailey said.

Bailey said the department has received calls from lifeguards from around the world, expressing interest in using the drone technology to monitor coastline. The drone, launched from a platform to avoid contact with sand, requires an observer and a controller to oversee the big picture. A tablet, separate from the drone, illustrates the drone’s aerial view, which is monitored by the observer.

Unmanned aircraft systems, otherwise referred to as drones, can be flown for recreational or hobby purposes per Federal Aviation Administration regulations. In this case, Seal Beach requires a Certificate of Waiver or Authorization in order to use the drone, said Ian Gregor, FAA spokesman. The waiver, however, sets limitations on where a drone can be used in order to ensure safety precautions.

Bailey said the department has begun the process for COA authorization. The drone’s policy is being developed as it’s being tested; at this point it isn’t used if there are people around.

After testing the drone, Bailey said they found other uses for it such as locating submerged vessels or missing swimmers. He said they would also like to create an informational video to educate the public about rip tides.

Arthur Newman, a La Mirada resident who frequents Seal Beach, said this week he isn’t concerned about the sharks.

“I’ve seen pictures of the sharks and they look 5 to 6 feet,” Newman said. “The drone should be used – it’s better technology than sending out a lifeguard.”

Although the sharks haven’t bothered anyone, Bailey and Lowe heed caution to not chase or harass them as they are still wild animals that will defend themselves if threatened. Lowe said sharks shouldn’t deter people interested in swimming or surfing in the area.

“I think it would be kind of cool to be surfing and to see a young white shark swim casually by,” he said.