Posted by Adele Scholl on 5/12/2015 to
By RICHARD N. VELOTTA
LAS VEGAS REVIEW-JOURNAL 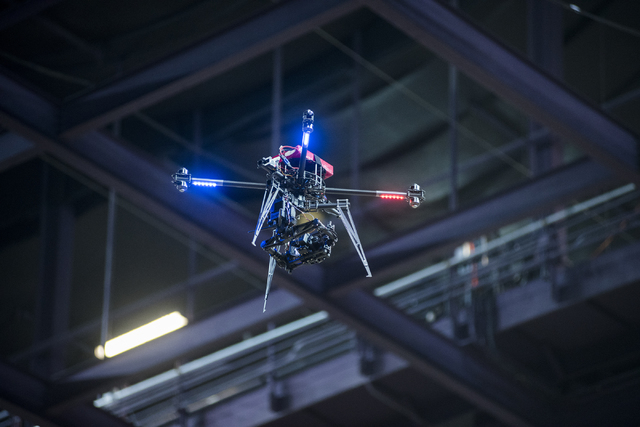 Front Row Cam’s flight crew captured the action of motorcyclists racing over an obstacle-filled race course for Round 3 of the nine-event Geico EnduroCross series.

Video images from the drone-mounted camera were available to fans through a smartphone app and portions of the race were shown on a big screen at Orleans Arena. A tape of the race will be broadcast on CBS Sports Network on May 10.

The taping marked a triumph for Front Row Cam, a subsidiary of Bowhead Systems’ ArrowData commercial unmanned aerial systems company, and a historic footnote for The Orleans as the first indoor venue to provide images from an unmanned aerial vehicle.

“It’s very exciting for us to finally get to do this,” said James “Heidi” Fleitz, a vice president with ArrowData.

Fleitz and his team have been working for months to perfect the system that uses a Cinestar X8 octocopter, an eight-engine craft mounted on quadcopter frame.

While Wilson managed the aircraft, Daub oversaw the video production and the others served as spotters to help Wilson locate the craft for the best possible camera angles.

The spotters also kept watch on the craft flying too high or too close to competitors or people in the crowd.

The aircraft is equipped with a number of redundant backup systems as safety measures. It could continue to fly even with two engines out.

When race fans entered the arena Friday, they were given cards offering directions to download a free application to their smartphones and connecting to a Wi-Fi network accessing the video feed from the drone camera.

Darren Davis, executive director of Orleans Arena, was pleased with the initial rollout of the technology and is excited with the prospects of using it with other sporting events at the arena.

“We’re happy to be a part of being the first in the industry and first in the country with this event and being on the leading edge of technology,” Davis said. Davis explained that in its relationship with Front Row it can offer use of the technology to any athletic or entertainment event at the facility.

“We explain it to our customers and if they’re interested, we get them connected with Front Row for the details,” he said.

Davis said there’s opportunity to use the technology because of the lengthy list of open-floor field sports events, including indoor soccer and basketball.

Partners have several options for streaming video images to fans in the crowd to monetize the assets. Although Friday’s event was free, it’s possible that future events could be part of an added-value package or provided for live TV on a contract basis.

“When I was in the military, I never thought I would end up doing this,” said Wilson, who retired from the Air Force after being stationed at Nellis.

He’s been with Front Row for about seven months, helping to develop the company’s sports entertainment platform.

“Our objective is to develop systems that are safer than what the Federal Aviation Administration requires,” he said.

Because Front Row’s flights are indoors, they did not require special permitting to fly from the FAA.