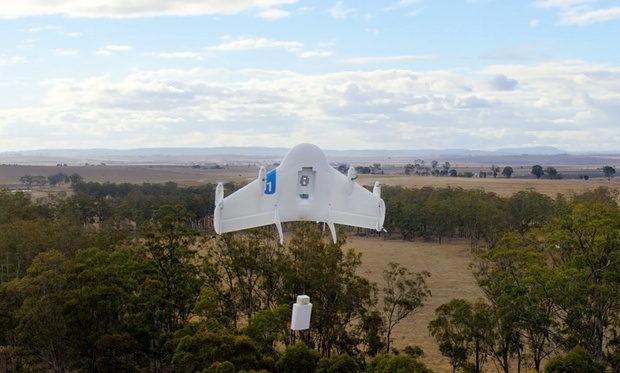 Google has been quietly testing its drone delivery program in US airspace and is planning further tests in rural California after striking a deal with Nasa, the Guardian has learned.

Documents seen by the Guardian also reveal technical details of Google’s drone, which is capable of speeds of up to 100 mph and weighs less than 25kg (55lb). The papers also reveal Google’s safety plans should a drone lose contact with its operator.

The US currently has a blanket ban on the commercial operation of unmanned aircraft. When Google revealed its experimental delivery drones, code-named Project Wing, a year ago, a promotional video showed a farmer in rural Australia receiving a packet of dog treats by air.

Companies wanting to take to America’s spacious skies need special permission from the Federal Aviation Administration (FAA), involving onerous requirements such as having a licensed pilot control the drone.

However, documents show Google has been skirting these rules by flying its Project Wing aircraft over private land in the US in cooperation with Nasa. For more than a year, Google has been quietly operating its drones in America under Nasa’s Certificate of Waiver or Authorization (COA), a program originally intended for government agencies.

COAs let public organisations like the military, state universities and police or fire departments experiment with unmanned aerial systems (UAS), as long as they meet safety standards. But COAs come with restrictions. FAA regulations state that a public agency must own or exclusively operate the drone in question, and that commercial operations are prohibited.


Are animals as averse to drones as humans?

COAs are not routinely made public, in contrast to the waivers issued to commercial companies, called “333s” after a section of the FAA regulations. It is widely known, for instance, that Amazon was issued a 333 exemption in April for research and development of its Prime Air delivery drones.

“I don’t think this kind of public-private cooperation is happening with high regularity,” said Diana Cooper, head of the unmanned aerial systems and robotics practice group at Canadian law firm LaBarge Weinstein. “But there aren’t too many stats out there.”

Both Nasa and Google declined to comment on the collaboration, although the Guardian has obtained a Space Act Agreement that says: “Nasa and Google will conduct joint field tests of UASs ... where Nasa may issue certificates of approvals to operate.”

The latest trials will be used to see whether cellphone signals can be used by low-flying drones for automatic air traffic control. According to documents filed with the Federal Communications Commission (FCC) last week and seen by the Guardian, Google wants to carry out demonstrations and tests on a remote stretch of privately owned land near Merced, California. The experiments, which Google thinks might last up to six months, involve transmissions on the 4G and LTE radio frequencies used by all the major cellphone companies in America, including AT&T, T-Mobile, Sprint and Verizon.

At a conference in Silicon Valley in July, Dave Vos, leader of Alphabet’s X Lab Wing project, talked about drones using cellphone technology to file flight plans and receive directions from computerised air traffic control systems. “Let’s work with the cellphone industry,” Vos said. “Join us – you can make a ton of money and so can we, and we can have fun doing it.”

Google would not confirm whether any phone companies are participating in these experiments, but the document it filed with the FCC says the latest experiments could help “generate new business opportunities for communications service providers and remove barriers to the broader deployment of UAS”.

The FCC filing also suggests that Google has a direct commercial interest in the upcoming tests. In requesting details to be redacted from the document, Google notes: “The information requested to be kept confidential has significant commercial value. Google’s tests/experiments and proprietary wireless applications using particular radio frequency equipment represent a ‘secret commercially valuable plan’.”

The company goes on to say: “The technology under development is highly sensitive and confidential in nature. The release of such information would provide valuable insight into Google’s technology innovations and potential business plans and strategies.”

“This is not a smoking gun,” said Cooper. “It’s typical for companies to want to redact sensitive information that describes how their technology works. The thing to keep in mind is just because there could be a commercial purpose later on doesn’t mean that Google is operating commercially right now.”

But while Google says that it can still legally fly its drones under Nasa’s COA, the company is hedging its bets. Last week, the FAA posted a request from Google for a Section 333 exemption to use its drones to perform aerial data collection, and conduct research and development.

This exemption request, also obtained by the Guardian, reveals new details about Google’s aircraft. Project Wing drones weigh less than 25kg (55lb), using multiple electric engines to fly at up to 100 mph and as high as 120 meters (400 ft). If a drone loses GPS navigation signals or communications with its ground-based operator, it will automatically return to base and land immediately.

This document claims that “Google’s proposed UAS operations ... will not adversely affect safety, but rather will provide an equivalent or greater level of safety than that provided by ... other delivery methods ... using trucks/cars/motorcycles or larger manned aircraft”.

Applying for a 333 exemption now makes sense, said Greg McNeal, drone expert and associate professor of law and public policy at Pepperdine University. “Google works on big-sky, futuristic thinking, which is a Nasa attribute,” he said. “Now we’re starting the transition from that big vision research to practical commercial applications.”

Google is unlikely to it receive its 333 exemption any time soon, however. “We have a backlog of 1,500 or so exemption requests,” says Les Dorr of the FAA. “Google’s request was only filed a week ago, so there’s no chance that it would have been granted at this point.”