Drone maker 3D Robotics sees the future, and it is apps 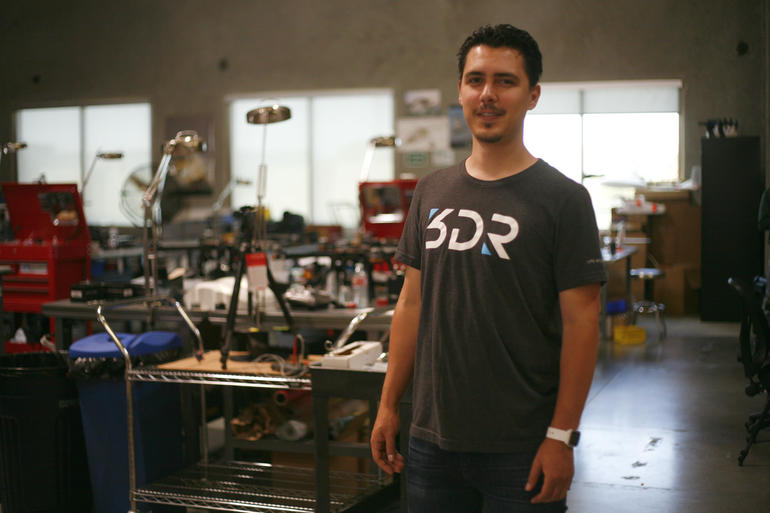 "The smartphone was a product that was intended for a consumer market, and now it went all the way to industrial applications and even the medical industry," Munoz says. "The same is happening with drones."

We're sitting on the second floor of 3DR's San Diego office where, from the window facing south, you can see Tijuana. The Mexican city, less than 10 miles away, is where Munoz grew up. It's also where 3DR's first manufacturing facility sits.

Munoz was just 19 years old when he got involved in the drone market eight years ago. A mostly self-taught programmer, he learned from the Internet and earned what he calls a "Google Ph.D."

Drones, he believes, are a market that's still primed for growth.

3DR started in 2009 selling Lego drone kits in pizza boxes; the first run of 40 sold out in 10 minutes. Today, 3DR sells seven models ranging in price from $550 do-it-yourself kits to $5,400 professional-grade devices. The company has more than 350 employees and is on track to rack up $40 million in sales this year.

Drones will truly take off, he says, when people figure out how best to use them beyond photography and for the simple fun of flying. What that means is that, as with smartphones, developers need to figure out how to build software that works on any drone -- similar to apps like Facebook, which are available on every device.

In that respect, 3DR is aiming to make tools that will be used to build apps for any drone.

Inside the drone nest

3DR is now headquartered out of Berkeley, California, where Chris Anderson, the former editor-in-chief of Wired magazine, oversees business operations as the company's CEO.

Anderson left his post at Wired in 2012 to partner full-time with Munoz, whom he met online.

Anderson understood that his partner was an impressive tinkerer with a big-picture view of the potential future of drones, but Munoz had no idea he was chatting with the head of a popular tech publication in 2007. Munoz was simply attracted to Anderson's community website, DIY Drones, which the journalist had set up that year to foster a hobbyist community and, eventually, to help others build their own drones.

Munoz, who thinks he was around the seventh person to register on the site, used it to show off his prototype projects and share code with fellow enthusiasts, including his groundbreaking autopilot system created from the innards of a Nintendo Wii remote. It became clear to Anderson in 2009, when he wanted to begin selling more DIY kits over the Internet, that he could turn to Munoz to get it done more efficiently. That partnership led to 3DR's incorporation in 2009.

As Munoz takes me into a warehouse in San Diego, 3DR employees in black T-shirts tasked with creating made-to-order drones are standing around a gigantic mutant device that's comprised of more than half a dozen motors and held together with 3D-printed piping. Behind them, a huge square section of the floor is enveloped in black nets and used for testing devices indoors.

The 3DR staffers are eager to show Munoz what they've been working on -- a drone that will deliver a special clamp to telephone poles for running new wire, like the fiber-optic cables that deliver ultrafast Internet connections. Munoz marvels at the drone's size and picks it up, feeling the weight.

"It weighs as much as it looks," he says with a laugh. For most people, something that size looks like it may weigh hundreds of pounds. For Munoz, who understands just how light drones have become in the last 10 years, the drone weighs an appropriate 45 pounds, or more than 10 times the amount of his company's standard vehicles.

"I didn't even know they were doing this," Munoz says with a shrug as he guides me through the rest of the warehouse, which is mostly used as a shipping center for the Tijuana plant.

"I don't think drones are going to be just limited to delivery and photography."
Jordi Munoz, 3DR

3DR, given its DIY roots, is a no-frills startup, at least with respect to its San Diego offices. There is no free food and you won't find any nap pods or hulking commuter shuttle buses. An upper section of the warehouse floor was to be turned into a kind of game room with hardwood flooring, but it sits empty with a few lonely Ping-Pong tables and an open wall overlooking the warehouse floor. Munoz says they haven't gotten around to remodeling it.

Munoz resisted leaving San Diego for Berkeley because he wanted to stay close to his family and where he grew up. As Anderson and others take on bigger roles at 3DR, Munoz gets to work on new technologies and features that help drones become more powerful and less costly.

"I don't think drones are going to be just limited to delivery and photography," he says. Munoz likens the new and undiscovered ways we'll use drones to the versatility of different smartphone components. For instance, a smartphone camera was once restricted to snapping shots like a traditional camera. But now, it can now used with sensors like accelerometers and gyroscopes as a measuring device. Or it can help software programs see and map environments.

"It's amazing how similar they are," he says.

The smartphone-to-drone comparison is apt. The term "drone" is shorthand for the kind of unmanned and somewhat autonomous aerial vehicle that now more resembles an alien spacecraft than remote-controlled airplanes of the '80s and '90s.

Part of what's driven the boom in drone sales has been the popularity of smartphones. Nearly every single component inside the modern-day smartphone, from the GPS chip and camera to the battery and the processor, were made cheaper by Apple, Samsung and others racing to make handsets thinner, faster and more powerful every year.

Many drones are now controlled by apps on smartphones as well.

Fifteen years ago, it would have been impossible to cobble together enough computer parts to make a remote-controlled aerial vehicle without spending thousands of dollars, let alone one that could be flown without expertise. Now, the consumer drone market is exploding. Goldman Sachs estimates sales will triple by 2017 from this year's $1.4 billion. It's not just hobbyists. Industries from Hollywood and real estate to architecture and ecology are finding ways to utilize high-flying robots with high-definition cameras. The cost is getting cheaper every day.

"Gyroscopes used to cost $5,000 to $10,000," Munoz said. "And the cheapest one was $300 -- and you needed three" to help a drone fly. Today, you can buy a drone with all the gyroscopes and other requisite sensors to keep it stabilized in midair for around $50 from Amazon.

"This is stuff that used to be military industrial technology; you can buy it at RadioShack now," wrote Anderson in Foreign Policy magazine in 2013. "I've never seen technology move faster than it's moving right now and that's because of the supercomputer in your pocket."

And as a result of improvements in the smartphone and tablet apps created to fly these machines, maintaining and upgrading a drone is also becoming easier. That, in turn, is opening the market to new types of customers.

"The magic of computers is they solve that mechanical complexity and transfer it to the software," Munoz says. The reason drones began taking off in the post-smartphone world was not just that costs were coming down, Munoz adds, but also that what we know as drones today were suddenly "very robust, very easy to repair and easier to fly."

Compared to a complex rotor-powered model helicopter, the $1,000, 3.3-pound 3DR Solo, which the company released in May, is a mind-blowing engineering feat.

"Humans cannot control four motors" at the same time, Munoz says of the standard quadcopter drone design that has displaced traditional helicopter and airplane designs for consumer aircraft. But thanks to a handful of sensors, cameras and other smartphone tech coupled with stabilizing algorithms, motion detection and GPS, a drone like the Solo can be flown with ease within minutes of unpacking it.

Unlike its biggest competitors, China-based DJI and French drone maker Parrot, 3DR offers a majority of its software components as open source, so anyone can download and use the code and modify it. The company also provides tools and mobile apps to develop your own drone software and to better understand and utilize all the data drones produce mid-flight.

Of course, 3DR has a long way to go before it can compete on the scale of DJI. That company, which was founded in 2006 and has nearly 3,000 employees and offices around the world, controls around 70 percent of the global drone market, according to Goldman Sachs.

DJI is also on track to pull in $1 billion in sales this year. That's thanks to its popular Phantom line of easy-to-use drones, which are known for their sleek white, Apple-like look and for being the primary device of choice for drunk pilots who want to fly the device dangerously close to the White House.

3DR wants to continue fostering the open source software community from which it was born in the hopes it will create the drone and app platform everyone begins using, from rookies to the most advanced, software-literate pilots.

"Maybe in a year or two years, we'll release a drone where it doesn't matter how stupid you are, how drunk you are," Munoz adds, "You won't be able to crash it."