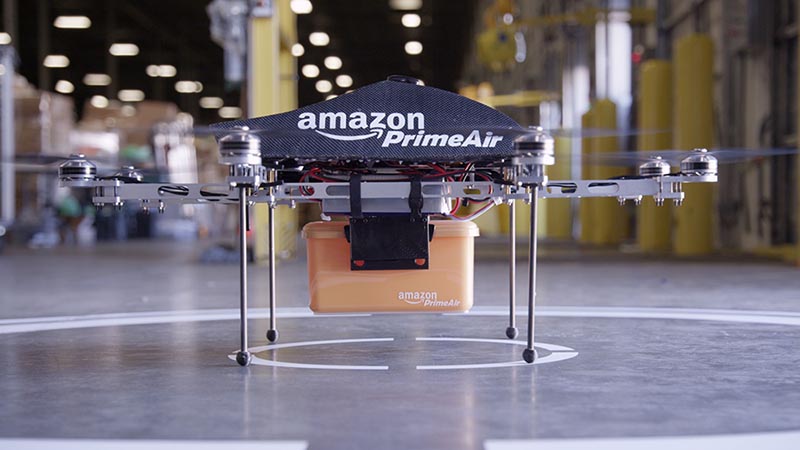 An Amazon drone being prepped at one of the company's delivery facilities. (AP Photo/Amazon)
By Ryan Mac and Frank Bi

The Federal Aviation Administration granted the Seattle-based online retailer the ability to legally test its much-discussed Amazon Prime Air delivery drones on Thursday, a small win for the company, which has been tussling with the government for permission ever since CEO Jeff Bezos announced the program in a Dec. 2013 interview with “60 Minutes.” Though it is a move in the right direction for Amazon, the certification is far from the sweeping victory that the company would have liked and still places heavy restrictions on a program that will not be delivering toothpaste and toilet paper to Americans’ doorsteps anytime soon.

The FAA’s certification will require Amazon’s drone operators to have “at least a private pilot’s certificate,” the same document required for a private, non-commercial plane owner to fly a Cessna. Current drone hobbyists have no such license needed to operate their drones, while some companies have recently received case-by-case commercial exemptions that allow them to fly without the same conditions that have been placed on Amazon.

“By insisting Amazon obtain an experimental airworthiness certificate, the FAA is treating drones the same as a Boeing 747 that’s operating for development or testing purposes,” says Brendan Schulman, a lawyer at Kramer Levin Naftalis & Frankel. ”This approach is some progress for Amazon specifically, but it’s still limiting for innovating companies in general.”

For Schulman, the FAA’s requirements for Amazon are far too restricting, as they not only require registered pilots, but also limit the drones to flying under 400 feet and within the view of operators. Representatives for Amazon could not be immediately reached for comment.

While Amazon will finally be able to test its drones in the U.S., it will be interesting to see how the company navigates the restrictions as it flies vehicles “on private Amazon property in a rural area of Washington state, away from people or crowds,” according to an earlier permit application. Based on its certificate, the FAA will require all testing of Amazon drones to be within the line of sight of pilots, a stipulation that will make it hard to properly trial the delivery of goods to homes or businesses, which could be miles away from a pilot.

Last month, the FAA unveiled its proposed guidelines governing the commercial use of drones in the U.S.–regulations that the industry had long anticipated. The proposed guidelines, which are currently being discussed before laws are drafted, would require pilots to take a written knowledge test specifically geared towards drone operation while also limiting drones to less than 55 pounds and an altitude of 500 feet. The FAA also began granting specific exemptions to certain companies employing drones for use cases such as railroad inspections and the surveying of construction sites.

That’s a step in the right direction says Chris Anderson, CEO of drone maker 3D Robotics, whose vehicles are being employed in some of those tasks.

“We’ve gotten our share of these [exemptions,]” says Anderson, pointing to a number of 3D Robotics customers who are now legally able to fly for commercial purposes. “ That’s just the interim until they complete this rule-making process.”

In the meantime, Amazon, 3D Robotics and a host of other technology companies have pooled their power behind the Small UAV Coalition, a Washington, D.C. lobbying effort to educate lawmakers on the potential for drones. Representatives from companies such as Google GOOGL +0.33%, GoPro and other group members congregated last month in the nation’s capital to meet with more than 50 congressmen over the span of two days says one source who was in the meetings. Amazon’s efforts were led by Paul Misener, head of the company’s global public policy, which shows that the company was serious about its drone program, says the source.

Though Amazon indeed seems committed, the main question is how far they’ll be able to push the FAA. Thursday’s certificate is an improvement on their past situation, but it comes with its fair share of red tape. Along with the pilot licenses, the company will be required to provide monthly data to the FAA on the number of flights conducted, pilot time, drone malfunctions and communication failures. “If you think of all the companies in this country who are building, designing and testing drones on their own property, the approach still doesn’t make sense because it would require those companies that are innovating rapidly and forcing them to seek approval for every tweak they’re testing,” says Schulman.

Follow me on Twitter at @RMac18 or email me at [email protected].
Article from Forbes - See Full article here